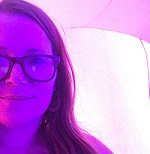 Welcome to the Solano College Library research guide for Sociology 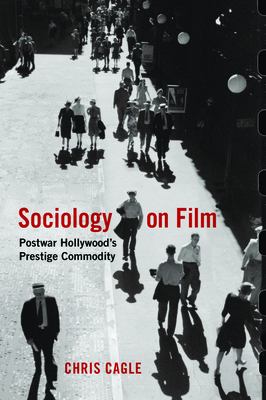 After World War II, Hollywood's "social problem films"--tackling topical issues that included racism, crime, mental illness, and drug abuse--were hits with critics and general moviegoers alike. In an era of film famed for its reliance on pop psychology, these movies were a form of popular sociology, bringing the academic discipline's concerns to a much broader audience.    Sociology on Film examines how the postwar "problem film" translated contemporary policy debates and intellectual discussions into cinematic form in order to become one of the preeminent genres of prestige drama. Chris Cagle chronicles how these movies were often politically fractious, the work of progressive directors and screenwriters who drew scrutiny from the House Un-American Activities Committee. Yet he also proposes that the genre helped to construct an abstract discourse of "society" that served to unify a middlebrow American audience.     As he considers the many forms of print media that served to inspire social problem films, including journalism, realist novels, and sociological texts, Cagle also explores their distinctive cinematic aesthetics. Through a close analysis of films like Gentleman's Agreement, The Lost Weekend, and Intruder in the Dust, he presents a compelling case that the visual style of these films was intimately connected to their more expressly political and sociological aspirations. Sociology on Film demonstrates how the social problem picture both shaped and reflected the middle-class viewer's national self-image, making a lasting impact on Hollywood's aesthetic direction. 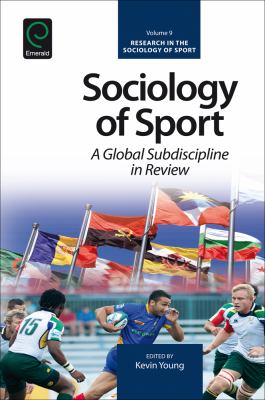 The Sociology of Sport has grown since its inception in the late 1950s and has become robust, and diverse. Many countries now boast strong scholars in the field and this volume reflects the fascinating research being done. This innovative volume is dedicated to a review of the state of the area by region, and country in some cases. For instance, Latin America is expanding widely in the field, and Korea and Japan have had vibrant Sociology of Sport communities for some time. 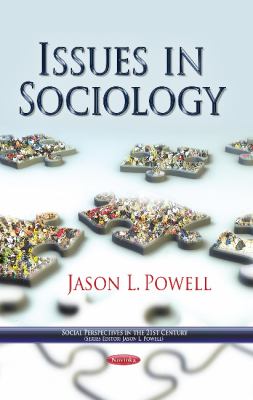 Sociology is the systematic study of the taken-for-granted assumptions that people make about everyday life. This book explores a triumvirate of important concepts in sociology: power, trust and globalisation. These concepts and examples need to be studied so assumptions masquerading as "fact" can be debunked by critical sociological questioning. We explore domains such as politics and government, health and community care as well as global financial issues, which are all centrally relevant issues in modern Sociology.

Extensive coverage of sociology and its subdisciplines, as well as closely related areas of study: criminology and criminal justice, ethnic and racial studies, gender studies, marriage and family, religion, social development, social psychology, social work, socio-cultural anthropology, substance abuse and other addictions, violence and many others. 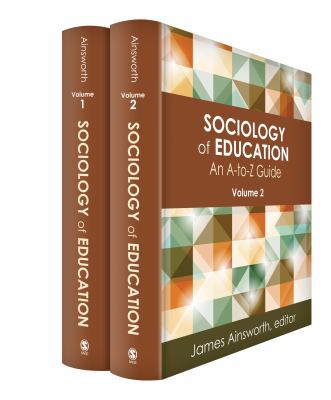 The sociology of education is a rich interdisciplinary field that studies schools as their own social world as well as their place within the larger society. The field draws contributions from education, sociology, human development, family studies, economics, politics and public policy. Sociology of Education: An A-to-Z Guide introduces students to the social constructions of our educational systems and their many players, including students and their peers, teachers, parents, the broader community, politicians and policy makers. The roles of schools, the social processes governing schooling, and impacts on society are all critically explored. Despite an abundance of textbooks and specialized monographs, there are few up-to-date reference works in this area. Features & Benefits: 335 signed entries fill 2 volumes in print and electronic formats, providing the most comprehensive reference resource available on this topic. Cross-References and Suggestions for Further Reading guide readers to additional resources. A thematic "Reader's Guide" groups related articles by broad topic areas as one handy search feature on the e-Reference platform, which also includes a comprehensive index of search terms, facilitating ease of use by both on-campus students and distance learners. A Chronology provides students with historical perspective on the sociology of education. 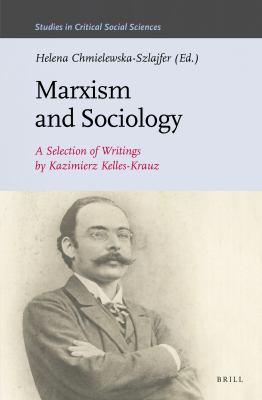 Kazimierz Kelles-Krauz was an extraordinary figure on the Polish political scene at the turn of the 20th century. A Marxist and patriot, academic and politician, Kelles-Krauz was most known for his efforts to reconcile the needs of the nation with international socialism. This volume, however, offers a selection of his writings centred on the history of ideas, published for the first time in English. Kelles-Krauz's works, while Marxist at heart, linked ideas stemming from the concepts of German idealists, French positivists, as well as contemporary sociologists who offered a bridge between research on individuals and the workings of social systems. Kelles-Krauz, however, repeatedly transcended Marxist tenets, focusing on the construction of traditions, social norms, and the social role of art. This edited volume was first published in Polish as Kazimierz Kelles-Krauz: Marksizm a socjologia. Wyb r pism by Wydawnictwa Uniwersytetu Warszawskiego in 2014. This current work has been revised and translated into English. 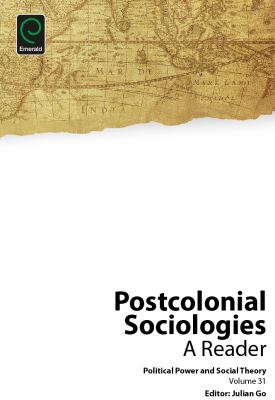 Postcolonial theory has mostly been confined to literary studies and the humanities, but it has been slowly making its way into social science. This is a welcome development but poses new challenges. How can postcolonial thought be most fruitfully translated and incorporated into sociology? This special volume brings together leading sociologists to offer some answers and examples. The chapters offer new postcolonial readings of canonical thinkers like Karl Marx, Max Weber, Emile Durkheim and Robert Park; consider whether or not postcolonial theory is compatible with sociology; explore the relationship between knowledge and colonial power; offer critical perspectives on the sociology of race; ponder the implications of postcolonial theory for global sociology; creatively employ postcolonial concepts such as hybridity; and excavate the social theories of occluded thinkers in India. This volume will be an important guide for scholars and students in the social sciences who are interested in what postcolonial thought has to offer. 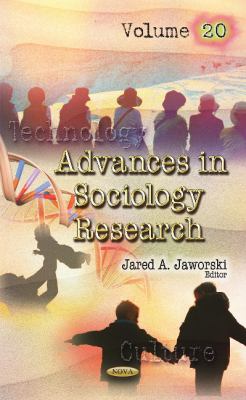 The authors of this book discuss the latest advances in sociology research. Chapter One focuses on understanding the current situation and factors affecting life quality of workers at Export Processing Zone/Industrial Parks (EPZ/IPs) in HCMC. Chapter Two reviews the international legal standards on the protection of child victims of crime and consider how these standards are implemented in Vietnam. Chapter Three utilizes county level white and African-American arrest and incarceration data from Iowa and Missouri to explore the effects of racial threat and political orientation on the likelihood of arrest and imprisonment. Chapter Four focuses on one seldom-discussed area of historical and contemporary eugenic control, the development of financial or social incentives or disincentives to foster eugenic aims, and discusses its social justice implications. Chapter Five explores the context and the challenges of the urban refugees and asylum seekers that live in the main urban centres of Thailand, coming from more than 40 countries of Asia and Africa looking for a safer life. Chapter Six examines refugees apprehensions which result in their negligence of given solutions, using Ghana as a case study. Chapter Seven reviews controversies and limits of a current debate on the centrality of work category in social theory and contemporary capitalism. Chapter Eight is about Pastor Nevers Mumba of Zambia, who is arguably an unsung hero of a Pentecostal politician with a quasi political theology that gives him the drive and the scope for his involvement in active and partisan politics. 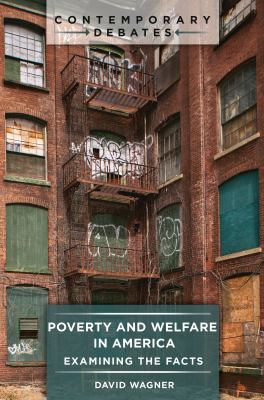 Poverty and Welfare in America

This book closely examines controversial claims and beliefs surrounding poverty and anti-poverty programs in the United States. It authoritatively dismantles falsehoods, half-truths, and misconceptions, leaving readers with an unbiased, accurate understanding of these issues. Poverty and Welfare in America: Examining the Facts, like every book in the Contemporary Debates series, is intended to puncture rather than perpetuate myths that diminish our understanding of important policies and positions; to provide needed context for misleading statements and claims; and to confirm the factual accuracy of other assertions. This book clarifies some of the most contentious and misunderstood aspects of American poverty and the social welfare programs that have been crafted to combat it over the years. In addition to providing up-to-date data about the extent of American poverty among various demographic groups in the United States, it examines the chief causes of poverty in the 21st century, including divorce, disability, and educational shortfalls. Moreover, the book provides an evenhanded examination of the nation's social welfare agencies and the effectiveness of various social service programs managed by those agencies in addressing and reducing poverty. * Features an easy-to-navigate question-and-answer format * Uses quantifiable data from respected sources as the foundation for examining every issue * Includes extensive Further Reading sections for each entry, providing readers with leads to conduct further research * Evaluates claims made by individuals and groups of all political backgrounds and ideologies to offer an inclusive examination of poverty and welfare